Geary Baptist Church is the oldest church in the area,  first organized on October 11, 1856. Geary Church was recognized in April of 1896 by Elder John Henderson.

The church was dedicated on Sunday, the 25th of October, 1903 by the Reverend Joseph Noble, who at the time was in his 86th year.

The first Deacons of the church in 1903 were Thomas Harper, and Samuel Boone. Fred Harper was the assistant Deacon. First Trustees were Fred A. Harper, Reuben J. Phillips and Thomas D. Smith. 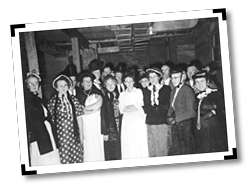 An old wood stove was used from 1903 until the 1940’s. When the basement was completed, a wood furnace was installed and later converted to oil. Music from 1905 to 1958 was by an old reed organ. The piano now used was purchased in 1950.

It is interesting to note that in the 1920’s the entire income for a twelve month period was less than $100.00. The old record book shows collection for a Sunday Service would run as low as $1.43.

Previous to 1903, the services held in Geary and Lauvina were held in the school house. French Lake had originally been in the Rusagonis circuit. The earliest record of a pastor in Geary was in 1866. He was Rev. G.W. MacDonald, ordained in the Oromocto Church on the 22nd of July, 1866.

Today, the Geary, French Lake and Waterville Baptist churches are probably amongst the most active churches in Sunbury County. The work done by the church is most certainly felt far and wide – and more than appreciated by a large number of people.